Weighing & measurement equipment is used in every step of production. From the time raw material arrives at a production facility, to the time finished goods are packaged & shipped, accurate weight readings are imperative to both quality & safety. Automated weighing systems are used throughout multiple processes during production.

In automated weighing systems, scales are typically added to one or more phases of operations to provide weight checks at multiple points during production. The integration of the scales into the production process allows users to automate certain tasks. The addition of a weighing system can help organizations maximize productivity, increase efficiency, decrease safety risks, or ensure consistency. Let’s take a look at a few examples of automated processes that are enabled by weighing systems. 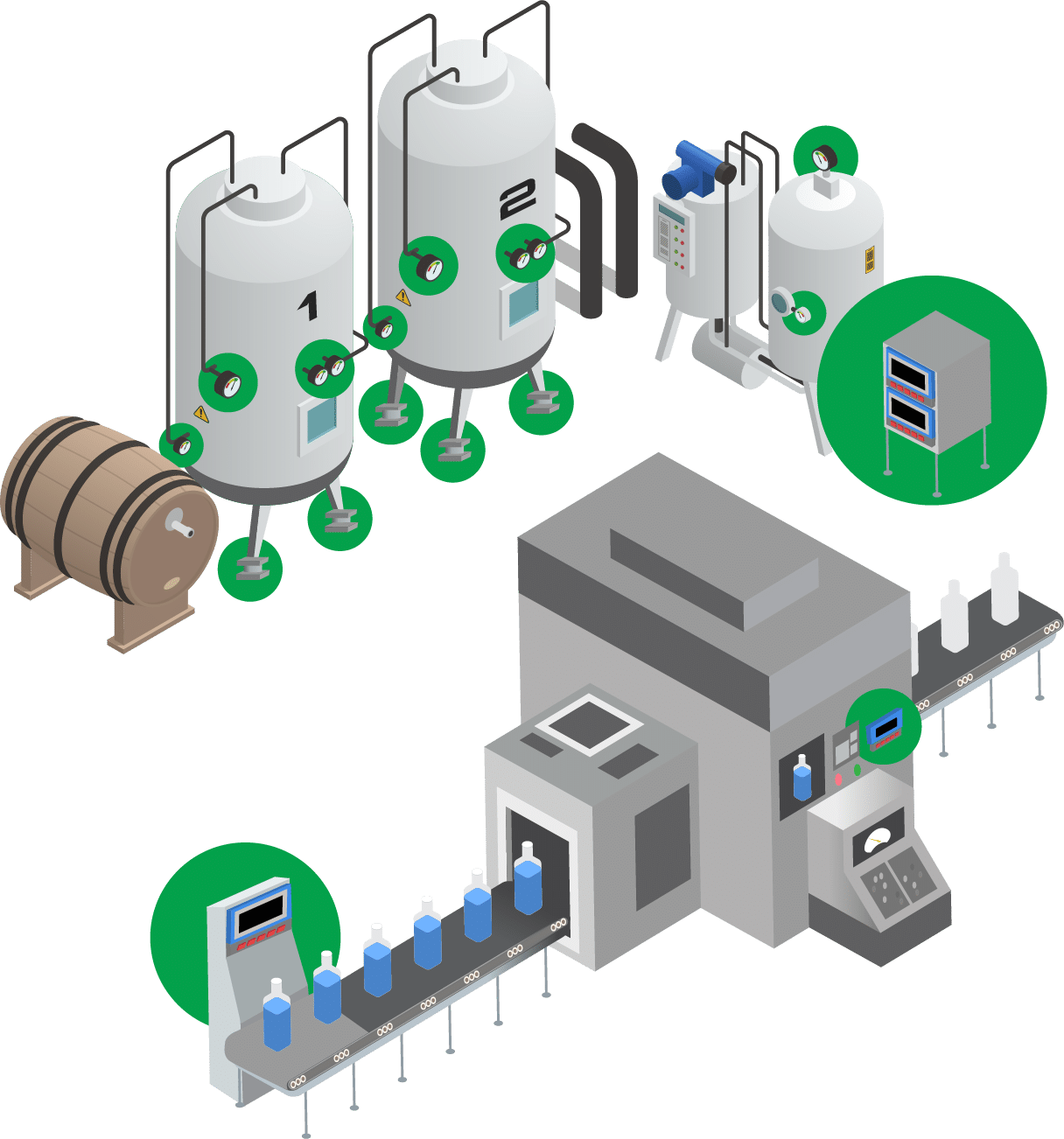 Weighing & measurement plays a crucial role in quality control, safety, pricing & transportation of food. Let’s examine a poultry processing plant to get a better idea of how automated weighing systems are used in the food industry.

Oftentimes, an automated weighing system is used after the poultry products have been packaged, but before they are boxed up & packed for distribution. Think of a pack of chicken thighs. Once the chicken has been placed on a tray & wrapped, it is sent down a conveyor belt. Embedded within the conveyor belt is a scale. Michelli Weighing & Measurement can program that scale to recognize a target weight range. Items moving over the conveyor belt scale that are within the target range will pass, which is indicated by a green light, while objects outside of the target weight range will fail, which is indicated by a red light.

If a pack of chicken thighs runs across the conveyor belt scale and it weighs .5 lbs, a red light would flash, signifying that the package was not within the target weight range. This would trigger an automatic “arm” to swing out and change the trajectory of the underweight pack of chicken thighs. This package would be rejected and pushed onto a separate conveyor belt so that it isn’t labeled & shipped. 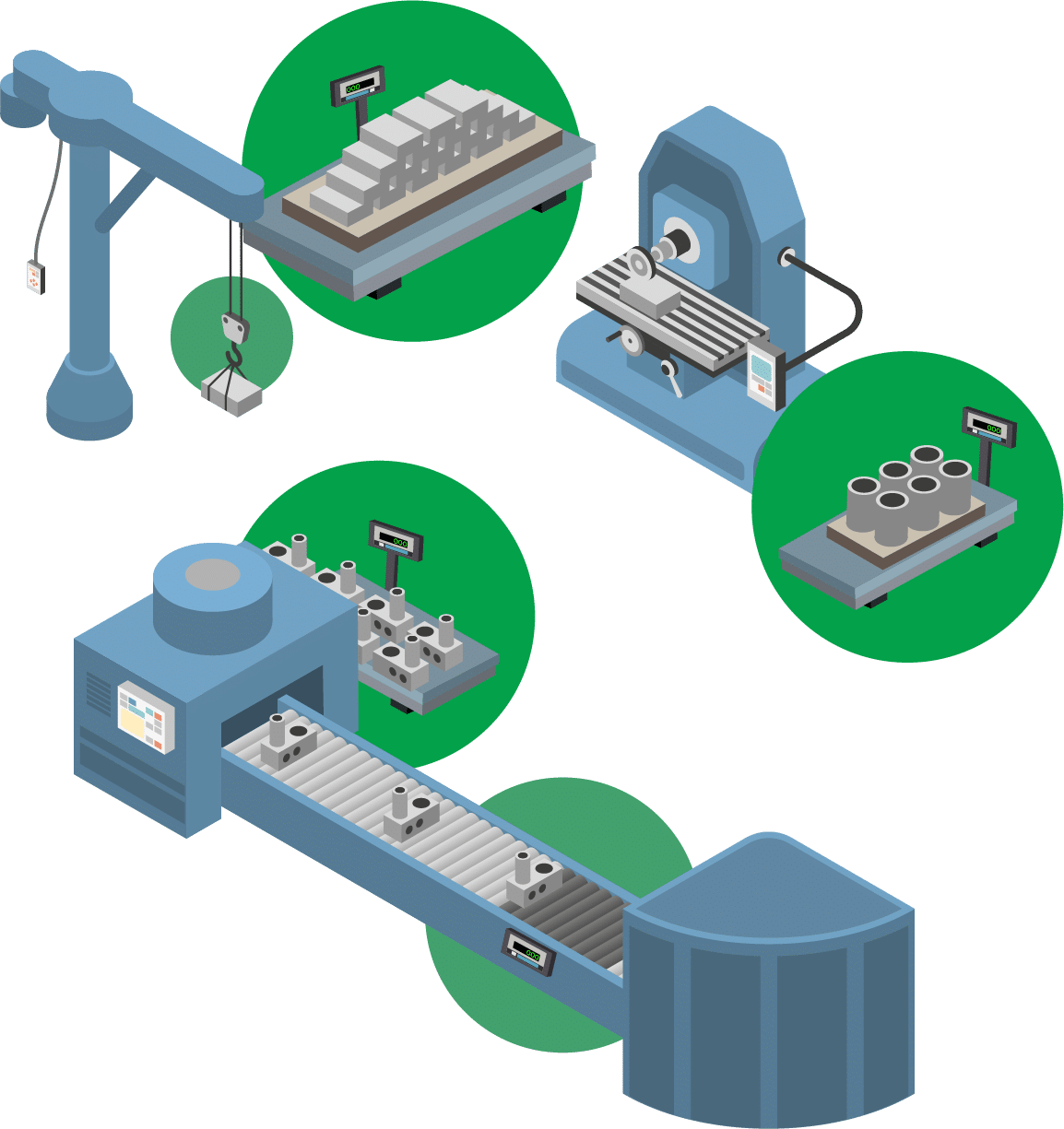 Groups of bolts that pass the quality control test would pass over the scale & continue down the conveyor belt to be packaged, then forwarded on to shipping to be sold. Groups of bolts that are rejected when they pass over the conveyor belt scale would be sent down a separate line of the system, where they could be collected & recycled or discarded. 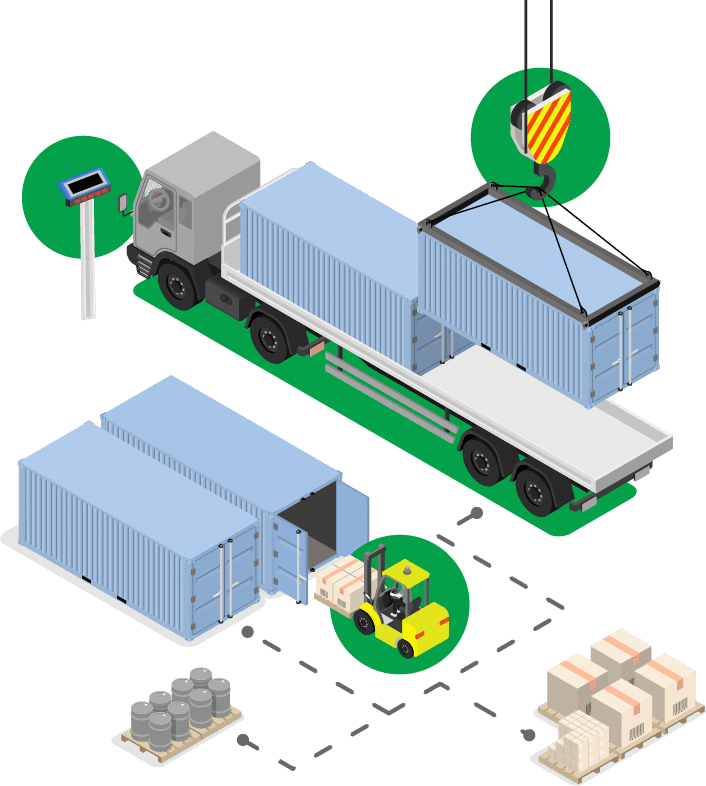 The last phase of manufacturing is getting the product from the producer to the consumer. Automated weighing systems can help with the transportation & logistics step as well. Imagine that the poultry plant needs to get boxes of packaged chicken thighs onto a refrigerated truck, then from the poultry plant to the grocery store as quickly as possible. The refrigerated truck needs to make sure it is within the DOT weight regulations as it leaves the plant. If the truck is underloaded, the plant is losing potential product sales & should add more cargo to make the most of the shipment. If the truck is overloaded, safety & regulatory concerns enter the equation. An overloaded truck is dangerous to the driver & other drivers, and could result in a wreck or a ticket, leading to higher insurance rates.

In order to prevent underload or overload, the trucks need to be weighed as they leave the poultry plant. If the plant has 1 truck scale, but 100 trucks leaving that day, there could be problems. The plant could utilize an automated weighing system to ensure that each truck was within target weight. Michelli Weighing & Measurement could program a target weight range into the scale, so that if the truck was within that range, a green light would flash, signaling the driver that he was within the legal limit & ready to go. A yellow light might be used to signify that a truck is underweight, while a red light might be used to signify that a truck is overweight. This way, the driver would never have to leave the cab of the truck, and could continue on his way if his weight was within the target range. That same automated system could also capture the truck’s weight, a picture of the truck’s license plate, and the date/time of departure. That information could be used to populate a spreadsheet, allowing the scale operator to determine how much inventory left the plant in a certain time period. This information can also be used to determine productivity, profitability & opportunities for growth.

Learn How an Automated Weighing System Could Help You

Contact us today to learn how an automated weighing system could help you increase efficiency & maximize productivity.

Find Your Nearest Location
We use cookies on our website to give you the most relevant experience by remembering your preferences and repeat visits. By clicking “Accept All”, you consent to the use of ALL the cookies. However, you may visit "Cookie Settings" to provide a controlled consent.
Cookie SettingsAccept All
Manage consent

This website uses cookies to improve your experience while you navigate through the website. Out of these, the cookies that are categorized as necessary are stored on your browser as they are essential for the working of basic functionalities of the website. We also use third-party cookies that help us analyze and understand how you use this website. These cookies will be stored in your browser only with your consent. You also have the option to opt-out of these cookies. But opting out of some of these cookies may affect your browsing experience.
Necessary Always Enabled
Necessary cookies are absolutely essential for the website to function properly. These cookies ensure basic functionalities and security features of the website, anonymously.
Functional
Functional cookies help to perform certain functionalities like sharing the content of the website on social media platforms, collect feedbacks, and other third-party features.
Performance
Performance cookies are used to understand and analyze the key performance indexes of the website which helps in delivering a better user experience for the visitors.
Analytics
Analytical cookies are used to understand how visitors interact with the website. These cookies help provide information on metrics the number of visitors, bounce rate, traffic source, etc.
Advertisement
Advertisement cookies are used to provide visitors with relevant ads and marketing campaigns. These cookies track visitors across websites and collect information to provide customized ads.
Others
Other uncategorized cookies are those that are being analyzed and have not been classified into a category as yet.
SAVE & ACCEPT