How much could an inaccurate truck scale cost you?

It’s no secret that preventative maintenance is the key to getting the longest life out of your weighing & measurement equipment. Regular inspections by a certified calibration technician are just as important to ensure that your equipment is producing accurate measurements.

Although most people realize how important preventative maintenance & equipment inspections are, sometimes these tasks get overlooked. That neglect could end up costing you big. How much exactly? Let’s take a look using a truck scale as an example. 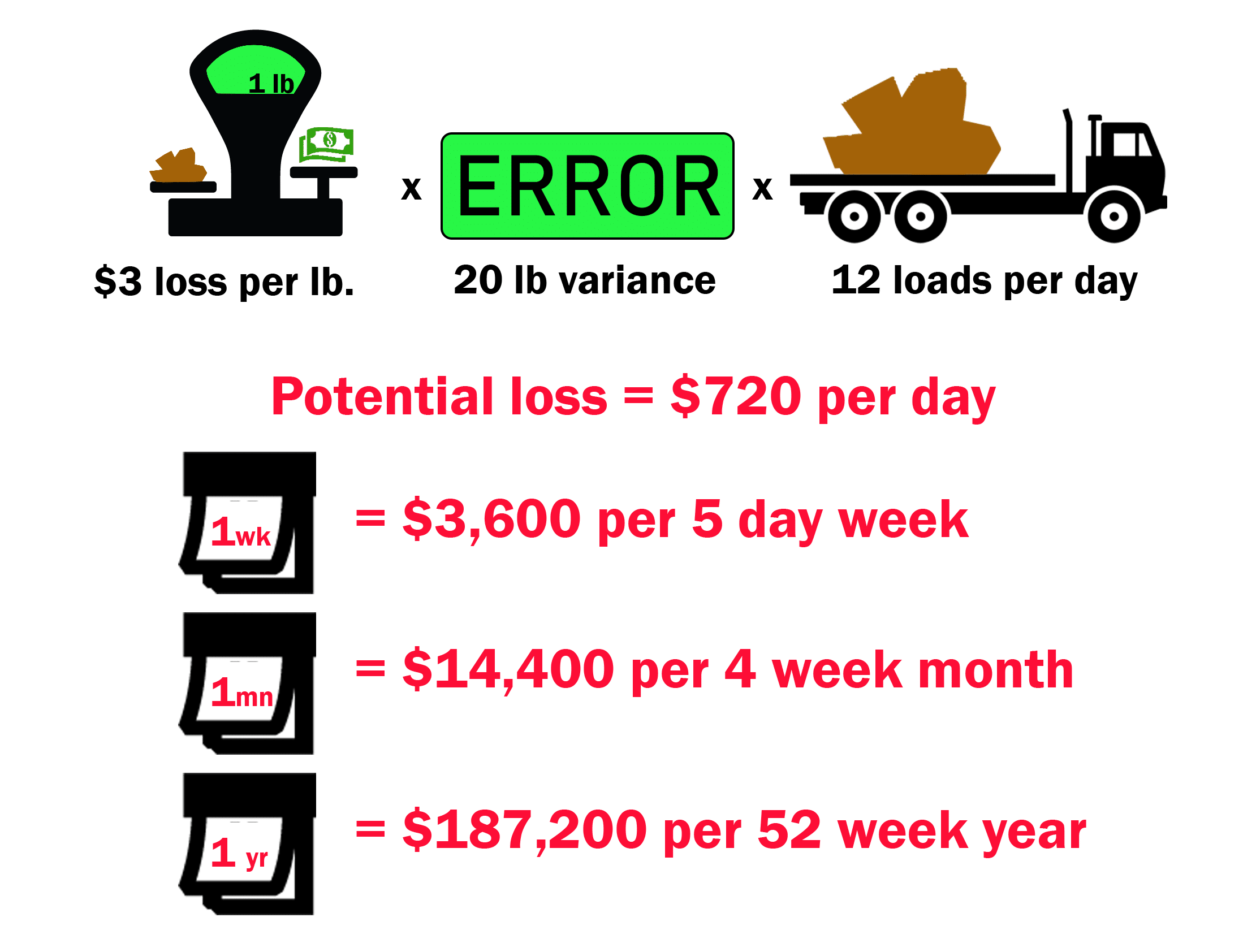 Find out how much an inaccuracy could cost you

For this example, let’s assume an aggregate company sells gravel for $3 per lb. A truck scale is used to weigh trucks as they exit the plant, filled with a load of gravel.

Let’s also assume that the truck scale is not displaying an accurate weight. If the scale variance is 20 lbs, the truck scale will indicate, or display the weight as 20 lbs over or under the actual weight. For this example, let’s assume the scale is weighing heavy. In that case, the scale indicates that the truck weighs 300 lbs., when really the truck only weighs 280 lbs. If each pound is worth $3, and there are 20 lbs. lost due to a faulty weighment, then the company would lose $60 per truck that passes over the scale on its way out of the plant.

Over the course of a 52 week year, the aggregate plant loses $187,200 due to an inaccurate scale.

Losses caused by inaccurate scale readings can be avoided with regular scale inspection.

Regular scale inspections are worth the cost to ensure your scale is weighing accurately. Proper preventative maintenance like removing build up can help ensure accuracy & allow more time in between inspections.

Regular scale inspections will bring you the peace of mind associated with knowing you’re not paying more than you should for materials by minimizing the amount of variance your scale allows. A scale inspection should be performed by experts, using NIST certified weights to give you an accurate picture of the condition of your equipment. Inspections conducted with test weights that are not NIST traceable are not reliable.

What is “NIST Traceability”?

Over time, regular use of test weights can affect their reliability. In order for test weights to be NIST traceable, they must be recertified annually. NIST is the National Institute of Standards & Technology, and as such, their website describes their responsibility as the following:

In other words, a NIST traceable test weight has been documented & certified to the exact weight as the NIST standard for 10 lbs. So if a NIST traceable 100 lb test weight is used to calibrate your scale, and your scale indicates a weight of 100 lbs, you can rest assured that your scale is weighing accurately, meaning you won’t be giving away money due to an inaccurate weight as outlined in the example above.

Michelli Weighing & Measurement companies use NIST traceable test weights to conduct all calibrations & scale inspections. The Michelli service team is equipped with state licensed calibration technicians, who have been trained in the proper method to calibrate & inspect weighing & measurement equipment ranging from heavy capacity to precision instruments. Michelli is the weighing & measurement partner you can trust, just as we have been since 1947.

Ready to Schedule a Scale Inspection?

Contact the experts at Michelli Weighing & Measurement. We can help you minimize loss & help to extend the life of your scales & measurement equipment.